BIDEN IS THE DEMS’ UNSOLVABLE DILEMMA

If you find yourself having to choose between two roughly equally unpalatable alternatives, you are at a Morton’s Fork.

Democrats rushed headlong to a Morton’s Fork when they, and the Lying Swine, attacked President Trump for calling attention to Slow Joe Biden’s cognitive decline.

What Trump and right wing radio talk show hosts say about Biden’s mental state is “offensive” and “unworldly,” said CNN’s Brian “Donuts” Stelter.  Biden is as sharp as a tack. Why just last weekend, he went for a bike ride!  What more proof of his mental fitness could you need??

Scott Adams asks: If a 70-year-old man goes bike riding without wearing a helmet, does that mean he failed the cognitive test?

The Democrat base is filled with trusting souls, eager to believe what party leaders tell them, no matter how implausible.

CNN and their media ilk don’t broadcast clips that show Slow Joe meandering into word salads of gibberish and nonsense, so most who get their “news” from the MSM have no idea how far gone he is.

When they do find out – as inevitably they must – they’ll be shocked, and peeved at the Lying Swine for deceiving them.

The Chicom virus gave Biden an excuse for hiding in his basement in Delaware. But as the pandemic recedes, people will expect to see him on the campaign trail.

I’ve long thought that once he was formally nominated, Biden would drop out for health reasons, elevating his running mate to the top spot.

Thanks to the Democrats’ spirited defense of Slow Joe’s mental faculties – and their harsh criticism of President Trump for questioning them – that is no longer possible, argues Thomas Wictor/Carlos Osweda.

For Biden to drop out now would prove Trump was right. Dems and the Lying Swine can’t afford that. So, for as long as Slow Joe keeps breathing, Democrats are stuck with him.

Which leads Democrats to a second Morton’s Fork.

I thought Biden would drop out because there is no way Democrats could permit him to appear on a debate stage with President Trump. The contrast is just too great.

Lefty journos are writing think pieces explaining why it would be okay – a good thing, even – if there were no debates. I doubt many Americans would see it that way.

If Biden ducks debates, he’ll pay a price… that will be higher if the debates go on without him.

Ordinarily, it would be a big mistake for President Trump to punch below his weight by debating the minor party candidates. But these are not ordinary times.

Debates without Biden would have a smaller audience. But it still would be among the largest audiences the president could attract. For a couple of hours, he could speak directly to Americans beyond his base. The Lying Swine would have little opportunity to censor or spin what he has to say.

The key is Kanye West. He’d take some black votes from Trump, but 5, 6, 7 times as many from Biden.

When Kanye hammers away at Biden’s racism and corruption, it’ll resonate more with younger blacks than would the same criticisms coming from an old white Republican.

Ducking debates wouldn’t hurt Biden as much as taking part in them. But Trump and Kanye can make it hurt a lot. If conservatives aren’t helping West get on state ballots, they sure should be.

According to this Rasmussen poll Monday (8/10), 59 percent of respondents don’t think Biden will be able to finish his term if he wins the election. Expect that number to be much higher in a month or so.

Consequently, the nominee for vice president should get more scrutiny than usual.

Initial reaction from BLM and the Bernie bros was not positive.

Harris blasted Biden for racial insensitivity during this presidential debate.

In another, Harris said “I believe them” of the women who accused Slow Joe of sexual misconduct.

How will Harris reconcile her support now for a man who a few months ago she implied was a racist and a rapist? It’ll be fun to watch.

Perhaps Biden forgot Harris said those things. But it makes me wonder how much say Slow Joe had in choosing his running mate.

When the primary campaign began, Harris was the Anointed One, the favorite of Barack Obama, big money donors, and the DNC.

Better known than the other women under serious consideration for veep (former National Security Adviser Susan Rice and Rep. Karen Bass), Kamala is articulate, energetic, and – until her most recent botched face lift – fairly attractive. 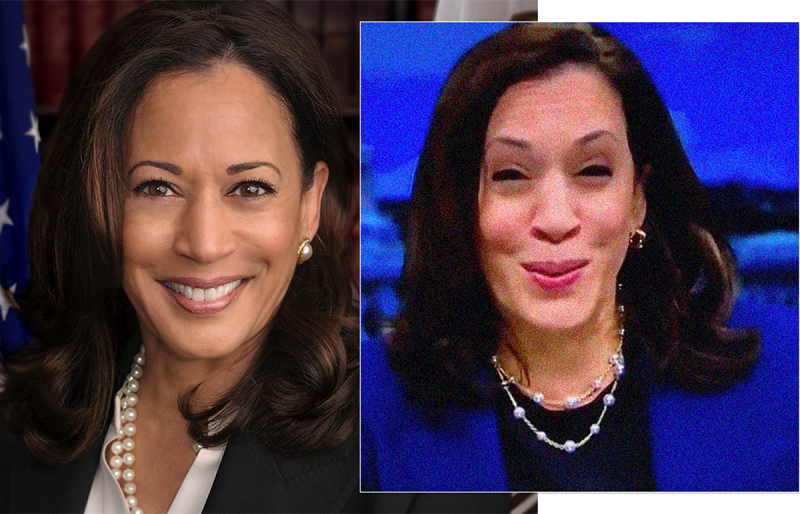 But Kamala crashed and burned early in the primaries. Nobody seems to like her very much.

Many African-Americans don’t because she isn’t one. They resent her pretending that she is. (Harris is from an Indian-Jamaican family that owned slaves.)

As California’s attorney general, Harris showed as much zest as Biden had for incarcerated young black men for nonviolent crimes.

“In order to appeal to disaffected black voters who might lean toward protest voting (Kanye)… Democrats ingeniously picked the one black candidate whose parents are not from America, whose ancestors had slaves, and who spent her career locking up black men,” said Robert Barnes.

House Speaker Nancy Pelosi and almost the entire California delegation lobbied hard for Bass, who would have brought nothing to the ticket other than not being Kamala Harris.

“She is a rude, nasty shrew who has no idea how she comes across to people who aren’t hard left,” said Brian Cates.

The candidate for vice president is expected to deliver a key state or constituency. But Democrats locked up the leftist harridan vote long ago.

Slow Joe is well and truly screwed if he needs help to win California. Harris – who couldn’t crack ten percent among California Democrats — won’t be of much help.

Oppo researchers who dig into Kamala’s spotty record as a prosecutor will have a field day. In this debate, Rep. Tulsi Gabbard (HI) previewed what they’ll find.  Tulsi kneecapped Kamala’s presidential campaign in three minutes.  Watch for this vid clip to go viral now.

Harris got her start in politics by doing sexual favors for legendary California Assembly Speaker Willie Brown. As this becomes more widely known, Kamala’s popularity isn’t likely to grow.  Google “Kamala Harris” + “kneepads” and you’ll get 20,000 hits, plus memes like this: 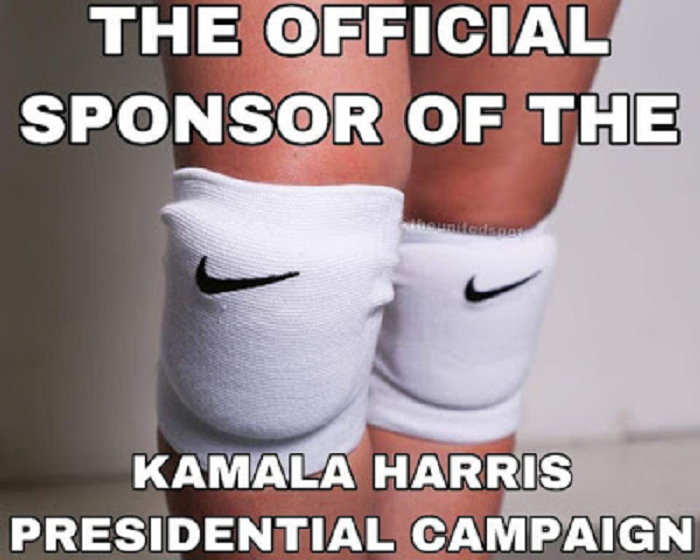 Then there are hashtags like #HeelsUpHarris and #HorizontalHarris on which you’ll find gems such as: 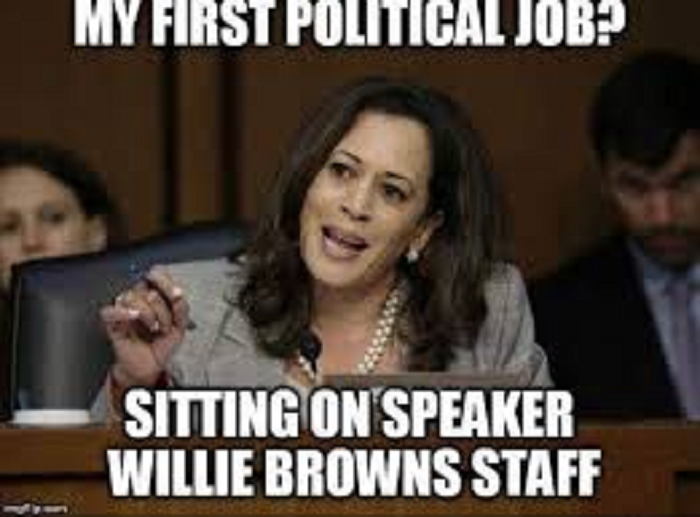 Could Biden (or whoever) have made a worse choice? It’s possible, I suppose. But I’m not sure how.  Team Trump nailed it in 30 seconds, tweeted by POTUS this morning (8.12):