Does the “news” depress you? Need something to cheer you up? Read mea culpa, mea maxima culpa, please don’t hurt me any more “correction” from the London Telegraph on January 26:  Melania Trump – An Apology.

“We apologize unreservedly to The First Lady and her family for any embarrassment caused by our publication of these allegations.  As a mark of our regret we have agreed to pay Mrs. Trump substantial damages as well as her legal costs.”

Not only is Melania Trump the most beautiful and sophisticated First Lady ever, she has a backbone of tempered steel. Smear her, and you’ll pay a price.

The article for which the Telegraph so abjectly apologized is an excerpt from a book by former Time magazine reporter Nina Burleigh, a skank who obtained her 15 minutes of fame by declaring she’d gladly fellate President Clinton for keeping abortion legal.

“One wonders how so many falsehoods could be crammed into a single article,” says Brit Hume.

Britain’s libel laws are tougher than ours. But there are so many egregious errors in Ms. Burleigh’s book that I suspect she and her publisher soon will share the Telegraph’s pain.

The most underreported news last week was that more than a thousand “journalists” – chiefly at Politico, Buzzfeed, and Gannett – lost their jobs.

Schadenfreude is a sinful pleasure, but I reveled in it all weekend. I hate with a purple passion the smug jerks that besmirch what was once an honest trade – my trade. I’d get more respect if told people I’d been a gigolo.

“Our national press is a national joke,” wrote National Review editor Charles Cooke last Thursday (1/24) in what unquestionably is the best description ever written of the contemporary news media.

“Vain, languid, excitable, morbid, duplicitous, cheap, insular, mawkish, and possessed of a chronic self-obsession that would have made Dorian Gray blush, it rambles around the United States in neon pants, demanding congratulations for its travails. Not since Florence Foster Jenkins have Americans been treated to such an excruciating example of self-delusion.”

“First, a poorly attributed story will break… Next, thousands of blue-check journalists, with hundreds of millions of followers (among) them, will send it around Twitter before they have read beyond the headline. In response to this, the cable networks will start chattering, with the excuse that ‘true or not, this is going to be a big story today,’ while the major newspapers will run stories that confirm the existence of the original claim but not its veracity...”

There’s much more delicious invective. You should read the whole thing.

The Schadenfreudelicious examples are so funny you’ll laugh ‘till you cry.  Try this one on:

This is happening because the billionaires who subsidize otherwise un or barely profitable “news” organizations are closing their deep pockets. Their hobby horses are becoming too expensive.

“Lawfare” has been waged exclusively by the Left. Until now. Smears of boys from a Catholic high school across the Ohio River from Cincinnati are changing that.

“Lawsuits are coming and not just over Covington Catholic,” says Brian Cates. “Many of these outlets who took money to publish what they KNEW were fake stories are about to take a massive financial hit.”

Trial attorney Robert Barnes bills himself as a fighter for the underdog who wins “impossible” cases. He’s representing some Covington boys pro bono.  He gave those who smeared them 48 hours to retract and apologize, or be sued.

Defamation is easier to prove under Kentucky law than under federal law.

Defamation is a false statement, presented as fact, which causes harm to the person or persons defamed. Slander is spoken defamation. Libel is written defamation. A defaming tweet is considered libel.

The plaintiff must prove (by a preponderance of evidence, not beyond a reasonable doubt) the defaming statement is false, and that the defendant knew it was false at the time he or she made it, or that the statement was made with reckless disregard for whether it was true.

Lawmakers will claim their smears of the Covington boys are protected by the Speech and Debate clause of the Constitution.

But, Barnes notes, in the 1987 case of Chastain v. Sundquist, the U.S. Court of Appeals for the District of Columbia held:

“We reaffirm the common law rule and settled constitutional design that elected representatives must answer for libelous statements made outside the scope of their legislative duties.”

Lin Wood and Todd McMurtry, attorneys for Nick Sandmann, the most maligned of the Covington boys and last week’s HFR Hero of the Week, said Friday (1/25) “we will be carefully reviewing all of the false accusations and threats made against Nick. We fully expect that a multitude of civil lawsuits will be filed and aggressively pursued.”

Lin Wood won big judgments against the Atlanta Journal-Constitution, NBC News and other media organizations that defamed Richard Jewell, wrongly accused of planting a bomb at the 1996 summer Olympics.

I hope NBC News is again in Lin Wood’s gunsights.

Last Wednesday (1/23), days after irrefutable video evidence surfaced that Nick Sandmann was a victim; “Native American Elder” Nathan Phillips an aggressor and a bald-faced liar, Savannah Guthrie interviewed both on the Today Show.

Guthrie asked Sandmann if he’d apologize to Phillips – even though by then it was clear Sandmann had nothing to apologize for. She asked Phillips if he’d forgive Sandmann; let Phillips repeat –without correction — his lies about the incident, defended his lie about being a Vietnam veteran.

Phillips enlisted in the Marine Reserve in 1972 (two years after Marines left Vietnam). He was a refrigerator repairman who was never stationed outside the United States.

Among those who reported Phillips was a Viet vet was Dan LaMothe, military writer for the Washington Post. It would have taken LaMothe just a few minutes to check out Phillips’ claim, but he didn’t bother. After others did, LaMothe issued a correction, which he thinks covers his posterior.

It doesn’t. Phillips’ unwillingness to produce a DD-214 (discharge paper) was a red flag. Most vets keep theirs close to hand.

A bigger red flag was Phillips’ claim to have been a “recon ranger.” There is no such MOS, in the Marine Corps or any other service.  Thus Phillips the fridge repairman is now laughed at all over the internet as “The Freon Ranger.”

I bet Phillips’ claim came from a Jody he learned in boot camp, one I chanted often while marching at MCRD San Diego:

I wanna be a recon ranger

Live a life of thrills and danger

I wanna go to Vietnam

I wanna kill a Viet Cong

No one expects a civilian to know these things, but a military writer for a major newspaper surely should.

The Covington boys can win, he said, if “you go after the media targets, the ones who you can prove – via their tweets and news reports – knew the truth but didn’t print it to support their agenda.

“You find the Twitter trolls who circulated these lies and then find out their paymasters. And you find the blue check psychos demanding these kids be murdered for their race, religion, gender and the baffled smile, in the face of the abuse these liars hid from their audience.”

Conservative lawfare is emerging in the nick of time. The Lying Swine will lie until they pay a price for it.

Only Congress ranks lower in public trust, but the Enemedia still exert enormous influence over public perceptions. If we’re to win in 2020, several million more Americans must be made aware of the true nature of today’s “journalists.”

High profile lawsuits on behalf of the victims of leftist libel and slander may be the best way to red pill them. And is the most effective way for us to participate in the battle.

It’s a battle against the straightforward evil of the Left: 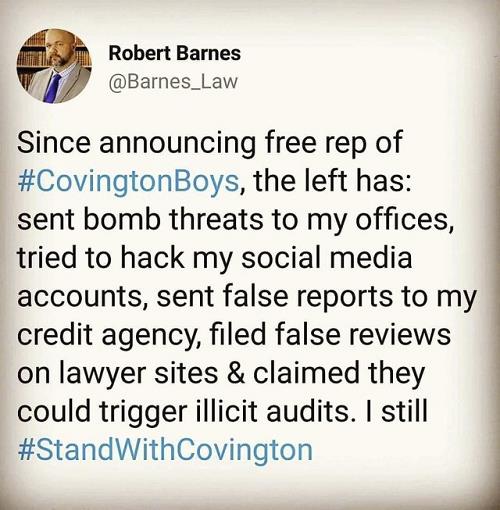 We should express to Robert Barnes and Lin Wood our thanks for battling on behalf of the Covington boys; encourage other lawyers to join the fight; contribute to funds that permit victims of leftist defamation to sue their defamers. We’ll get more bang for our bucks than by making political contributions.

“Asserting your rights is the only way to protect them,” Barnes says.  And to bankrupt the Fake News Lying Swine Fascist Media.

Jack Kelly is a former Marine and Green Beret and a former deputy assistant secretary of the Air Force in the Reagan administration. He is national security writer for the Pittsburgh Post-Gazette.