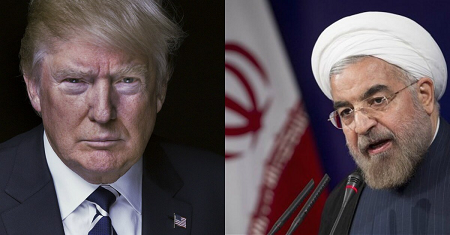 There could be no greater contrast in leadership on the world stage and in interpreting reality than President Obama’s “lead from behind” model in Iran versus President Trump’s “lead from the front” model.

When the Iranian people demonstrated against the nation’s dictatorship in 2009, President Obama was weak and quiet. He was so interested in getting a nuclear arms deal with the dictatorship that he did not want to irritate Iran’s leaders

In the elites’ world, the United States should be a weak, timid country that avoids irritating dictators and upsetting the “international order.”

President Trump represents a remarkably different view of reality. He believes weakness begets weakness. He believes bad regimes are bad. He believes leaders look for opportunities and move aggressively and courageously to advance their vision of the world. He believes America is big enough and strong enough to provide real leadership.

Where President Obama minimized public comment about the Iranian people taking on their dictatorship, President Trump has taken the opposite approach. He called out the Iranian regime’s treatment of its people before there were any demonstrations.

In his address to the United Nations in September, President Trump said:

“The entire world understands that the good people of Iran want change, and, other than the vast military power of the United States, that Iran’s people are what their leaders fear the most. This is what causes the regime to restrict Internet access, tear down satellite dishes, shoot unarmed student protestors, and imprison political reformers.”

Note that President Trump, who the elite left insists is ignorant and dangerous on national security and foreign policy, was describing the potential for the current popular demonstrations three months before they started.

Now that as courageous Iranians are risking prison and even death by standing up to the dictatorship, President Trump is once again proving that he represents the opposite of President Obama’s passivity and weakness.

President Trump is personally tweeting and speaking out. His spokesperson, Sarah Sanders, has defended the president’s aggressiveness and frankness in taking on the Iranian dictatorship. Ambassador Nikki Haley has been incredibly strong in speaking out at the United Nations. The National Security Council is coordinating an active effort to help the Iranian people and undermine the dictatorship.

The Wall Street Journal captured the Obama administration’s “illusions about Iran” perfectly in a Jan. 2 editorial that said:

“The world should support this fight for freedom, which is exposing the illusions about Iran that dominated the Obama Administration. Start with the claim that signing a nuclear deal with the Tehran regime would moderate its behavior. Ben Rhodes, President Obama’s chief foreign-policy salesman, said in June 2015 that ‘a world in which there is a deal with Iran is much more likely to produce an evolution in Iranian behavior, than a world in which there is no deal.’”

The editorial continued: “Mr. Obama said the pact ‘could strengthen the hands of more moderate leaders in Iran.’ And Vice President Joe Biden’s national security adviser Colin Kahl said in 2015 that the Iranians ‘are not going to spend the vast majority of the money on guns, most of it will go to butter.’

Toward that end, the nuclear pact lifted international sanctions and unfroze $100 billion in Iranian assets.

The WSJ editorial went on to say:

“Yet instead of using the money to improve the lives of Iranians, Tehran has used its windfall to back clients making trouble throughout the region. The mullahs have spent billions propping up Syria’s Bashar Assad with troops, weapons and energy shipments. Iran funds Shiite militias in Iraq, Hezbollah terrorists in Syria and Lebanon, and Houthi fighters in Yemen.”

All three of Trump’s key national security and foreign policy advisers have fought in the Middle East. All three know that they lost young Americans to Iranian weapons, trainers, advisors – and in some cases, terror operatives. All three believe that the current Iranian dictatorship poses an enormous threat to global and national security as the leading state sponsor of terrorism – with or without nuclear weapons.

The difference in sophistication, personal experience, and reality-based analysis between the Obama and Trump teams is astounding.

Some of the difference is beginning to impact even establishment analysts.

David Ignatius, one of the most respected columnists on foreign affairs and national security, wrote a recent column in The Washington Post headlined: “Trump is right to tell Iran the world is watching.”

When President Trump starts getting “Trump is right” headlines in The Washington Post, you know something big is happening.

It turns out a real leader who is leading from the front can make a significant difference.

Newt Gingrich was Speaker of the House from 1995 to 1999.. His latest book is “Understanding Trump.”