2 The Point News » Kelly's Panorama » Members Only » ARE DEMS STUCK WITH JOE?

ARE DEMS STUCK WITH JOE? 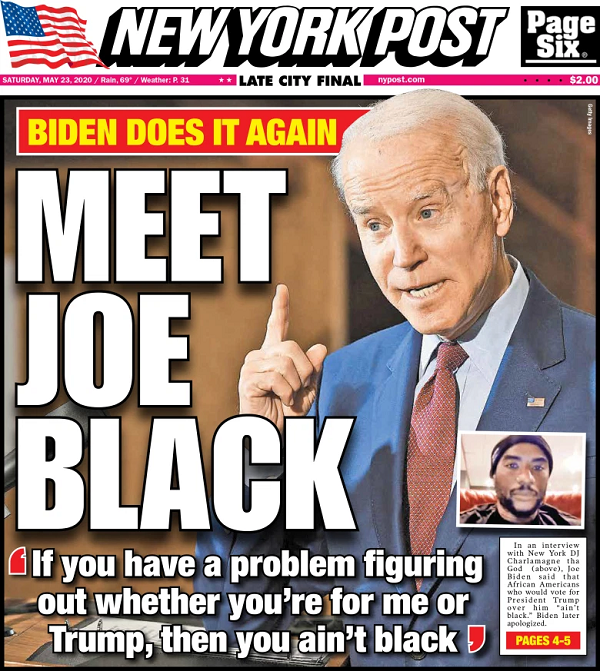 If I could feel sorry for anyone on Team Biden – and forget that! – it would be for his press secretary, who must feel like the guy with the shovel who walks behind the elephants at the circus.

Radio personality Charlamagne tha God (real name Lenard Larry McKelvey) concluded a podcast Friday morning (5/22) by inviting Biden to come on to his show again, because he had more questions about Biden’s positions on issues important to the black community.

“if you have a problem figuring out whether you’re for me or Trump, then you ain’t black,” Slow Joe responded.

It wasn’t just conservative blacks who thought the gratuitous remark – delivered with a smirk — was “arrogant and condescending.”

Biden “should spend the rest of his campaign apologizing to every Black person he meets,” said Robert Johnson, co-founder of Black Entertainment Television.

The controversy gave Republicans the opportunity to remind people of other “insensitive” remarks about race Biden made in the past; that he authored the notorious 1994 crime bill that gave long prison sentences to blacks accused of nonviolent crimes.

His record on race relations is “second to none,” Biden said as the controversy exploded. He’d been a Civil Rights marcher in the 1960s (he wasn’t); “the NAACP endorsed me every time I ran.” (The NAACP never did, doesn’t endorse candidates.)

It remains to be seen whether this gaffe will cause Slow Joe more than momentary embarrassment. But how many more self-inflicted wounds can his campaign absorb before the bleeding is deadly?

Biden was a gaffe machine before becoming senile, deteriorates more each day. Unless – maybe even if – he is kept on a very tight leash, there will be more.

If Slow Joe is the Democrat candidate in the fall, there’ll be no presidential debates. He’ll make few campaign appearances – none of them lengthy – all before friendly audiences.

It’s hard to win an election hiding in your basement. But the risk to Democrats from what Biden might say is greater than if he says nothing at all.

The powers that be in the Democrat party must regret rallying behind Biden to keep Bernie Sanders from winning the nomination. The Old Bolshevik isn’t part of the globalist elite, but he is a weak, lazy man who is easily bought off. (In 2016, all it took was a vacation home.)

And – until the DNC forced them out – there were so many candidates running there was little likelihood Sanders could win a majority of delegates in the primaries. The powers that be could have nominated whoever they liked on the second or subsequent ballot.

I thought the Anointed One would be Sen. Kamala Harris (D-CA). She’s black (albeit Jamaican without a heritage African-Americans can relate to), reasonably attractive, fairly articulate, isn’t connected to Obama administration scandals which might emerge.

But something about Harris was off-putting to rank and file Democrats, black and white. She never gained much support. Her candidacy collapsed after Tulsi Gabbard eviscerated her in a debate last August.

There was legitimate concern among Democrat power brokers that Sanders’ Communism would make him a weak general election candidate. But Biden has adopted essentially the same positions on most issues as the Old Bolshevik.

Even before his senility became obvious, Slow Joe was the weakest candidate Democrats could nominate, because he totes around more baggage than Amtrak. Sanders may be a Commie, but he isn’t a pervert, isn’t so obviously corrupt, can speak for more than 120 seconds without saying something stupid or losing his train of thought.

Dem power brokers hope Biden can hold it together long enough to be nominated, resign shortly afterward for health reasons, making his running mate the Dem candidate in the fall.

Democrats being who they are, the vice-presidential candidate almost certainly will be a woman. Because of Biden’s gaffe Friday, very likely a black woman.

This puts Harris back in play. But will rank and file Dems find her more appealing in August than they did in the Spring?

How people react to Spygate revelations over the next two months will determine whether Floppy Mike or Rice are viable. Abrams is campaigning hard for the job. I hope she gets it.

If Biden drops out before the Democrat convention, the power brokers could nominate whoever they like. Perhaps a popular governor with no ties to Obama administration scandals.

But which governor? Andrew Cuomo (NY) gets great press, but ought to be indicted for manslaughter for ordering thousands of COVID-19 positive patients be taken to nursing homes.

Other prominent Dem governors also bungled their response to the Chicom virus. As they lock up their populations for no good reason, their popularity is plunging.

Who else is there? Nanny Bloomberg already has crashed and burned.  Slow Joe is the worst candidate they could nominate, but Democrats may be stuck with him.