ANATOMY OF A TIDAL WAVE ELECTION 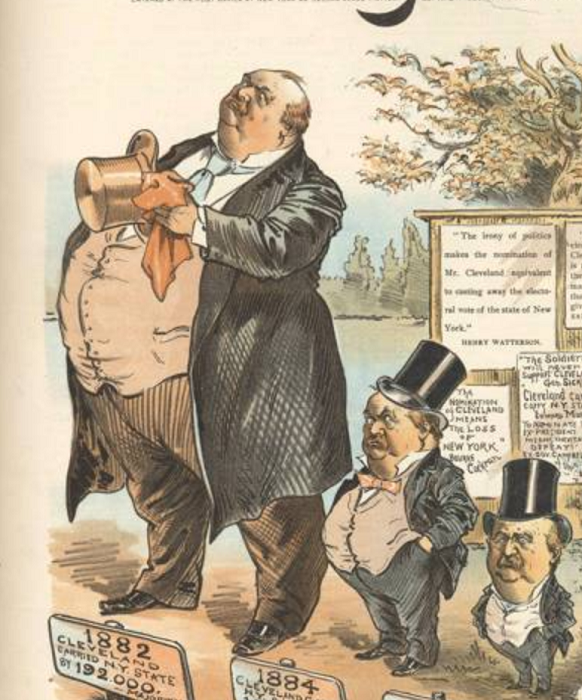 President Cleveland shrinking through the years

Carlisle, Pennsylvania—It was called the political storm of the century. It would end with the largest single turnover of power in American history—and one for the ages.

It was fall 1894. People were still feeling the effects of the Panic of 1893, which had shut down most of the economy and plunged the nation into a catastrophic recession, with every segment of the country in a world of pain. Farmers were disgusted with the cost of wheat; laborers were desperate for jobs and higher pay.

The biggest punch of all, the Pullman Strike, had caused a massive, nationwide boycott of all trains that carried Pullman passenger cars. It pitted labor against the company, the press, the federal government, and President Grover Cleveland, a Democrat in the beginning half of his second nonconsecutive term in office.

When Cleveland called in the U.S. Army to quell the strikers, the die was cast for his party. Just four years earlier, Democrats had gained 86 House seats and a majority. On election night 1894, Republicans gained 130 seats—a whopping 35% of the lower chamber, which totaled 357 seats at that time.

Democrats lost 125 seats outright, with Republicans picking up third-party seats as well. It remains the largest numerical loss for a political party in US history, according to the House historian. The House went from 218-D/124-R to 253-R/93-D. Now that’s a wave!

Newspaper accounts at the time wrote of dancing and celebration in the streets, with headlines that read, “Crowds Gone Wild,” and the Pittsburgh Commercial Gazette reporting, “Thousands of them assembled on Pittsburgh’s streets last night to cheer the returns. They also indulged all the infernal devices for making noise the diabolical mind of man has been able to invent.”

Here in Cumberland County, the headlines read that Republicans took a 200,000-vote plurality in the state. This foreshadowed the demise of Tammany Hall in New York City, as Democrats there, too, were swept out of office.

The Democrats had woefully handled every crisis that came their way that year. And their use of the press as a weapon against the people had backfired. America was in the middle of the Gilded Age — when agricultural markets crashed, the railroads were the next domino to fall, then the steel industry, and then manufacturing.

Cleveland hesitated to act. When he finally tried to repeal the Silver Purchase Act in an attempt to strengthen gold, it was too late. His move caused a bank run and a stock market crash, unemployment neared 20 percent, and voters wanted the lot of his party thrown out.

Making Democrats’ problems even worse was a new populist movement—a left-wing faction of the party that was siphoning off the support of farmers and laborers especially. They were furious over Democrats being in bed with big business.

The populists not only cost the Democrats even more seats, but their politics had a lingering effect on the Democrat Party. It would be 16 years before Democrats won a House majority again.

The blowout also affected their presidential prospects. Despite the massive midterm election loss, Cleveland would attempt to seek office for the third time. He failed, losing renomination to populist firebrand U.S. Representative William Jennings Bryan (D-Neb.). He would run for president and lose three times as a Democrat.

In the past 128 years, we have never seen a majority swept out with such vigor and magnitude as it was in 1894. In truth, it is unlikely to happen again. However, that doesn’t mean the Democrats are not trying hard to break that record, or at least the more recent one set in 2010 by the Republicans.

It is astonishing to witness the messaging that Democrats in Washington, D.C., think their voters—in particular, Democrats in swing districts—should use to hold their seats or win new ones. Most of the messaging is calling Republicans extremist, insurrectionist QAnon members who are transphobic and want to take reproductive rights away from women.

That’s a lot of wasted spaghetti thrown at the wall, especially given that none of this messaging even attempts to address the many issues that are shifting voters away from the Democrat Party.

Democrats are treating the crime issue like it’s a parlor game. Spend any time listening to the police scanners in New York, Philadelphia, Washington, D.C., or Chicago, and you will find the problem is very real and out of control. The blame lands right in the hands of Democrats, who thought it was a great idea to spend two years either calling for the police to be eliminated or defunded in their cities.

Democrats’ negligence at the border is having an effect as well—not just on Texans in the Rio Grande Valley but also on the suburban parents in Shaker Heights, Ohio, and Butler County, Pennsylvania. They are suddenly finding that fentanyl has made its way into their circles and taken hold of their children or their friends.

Democrats seem not to understand that voters see a crisis with no plan to remedy it.

Meanwhile, no one is shaking off inflation as a passing phase—it is real, and it is hurting all of us. Hardest hit are the working poor and the middle class.

No one in Biden’s administration or the Democrats’ House and Senate majorities seems to have a message that they are in control of this—that there is some sense of a clear economic plan, at least to get things moving along the right path.

The only message Joe Biden has given people on inflation is that it is Russian President Vladimir Putin’s fault—an insulting premise to everyone who has been watching prices rise rapidly for the last 12 months.

Suburban parents are moving rightward, even if they don’t want to, because Democrats have gone overboard on control of the classroom, questionable curricula, and over-the-top mandates.

Even the issues that surround Roe v. Wade are highly unlikely to save them. Indeed, depending on how they play it, the coming Supreme Court decision might actually cost them votes. Messaging on abortion is quite perilous. The more you argue in favor of it, and the more emotionally and graphically you do so, the more you turn people off.

Grover Cleveland, like Joe Biden, remained both stubborn and stuck—both ahead of those midterm elections and in his final two years in office. He tried to weaponize the press against the farmers and the working class. He continued to hold the same positions, including a commitment to free trade, that turned voters away from him.

After the Nov. 6 midterm elections in 1894, Cleveland said nothing for days. He left the White House early on the day of the election to escape to his country home on Woodley Lane. His first emergence came in the form of a proclamation making November 29 a day of “thanksgiving and prayer.” He never forgave his party for abandoning him two years later.

Grover Cleveland, like Joe Biden, remained both stubborn and stuck ahead of the midterms and in his final two years in office. More than a century later, Democrats are in for another hard lesson.

Salena Zito is the author of The Great Revolt: Inside the Populist Coalition Reshaping American Politics.