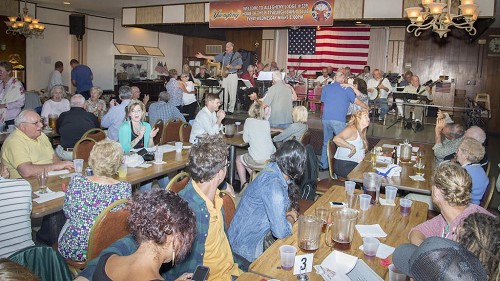 Pittsburgh—It’s just before 7 p.m. on a frigid December night, and already the Allegheny Elks Lodge No. 339 on the city’s North Side is filling up quickly—both the long bar and the tables in the adjacent hall.

There’s a woman collecting for a 50-50 raffle. (You may as well give in; she won’t take no for an answer.) Elks volunteers young and old are manning the bar and the kitchen, where the special tonight is a gourmet grilled cheese (black forest honey ham, Gouda cheese, and bacon).

Upstairs a six-lane sparkling white and red art deco bowling alley straight out of the 1920s is filled with young people from a local league. The floor above that is where lodge meetings are held; it is a beautiful ballroom also straight out of the Roaring ’20s.

The beer is cheap and cold. The food is cheap and tasty. Soon the entire building is packed to the rafters, people lining the walls in the hall and the bar. It’s as if Frank Capra made a movie in this century.

Tonight is Banjo Night, the weekly event when the Pittsburgh Banjo Club takes to the stage in the 90-year-old building. The event attracts an eclectic mix of college students; suburbanites; pink-haired, inked, multi-pierced artists; and octogenarians all joining in to sing along to tunes like “Daisy, Daisy” and “You Are My Sunshine.”

There’s even a free song sheet, but it carries a stern warning: “Thou shall not take with you.”

This is not an Elks event, as the Banjo Club rents the hall every week. Still, its presence at the lodge has helped reignite interest in the civic organization that first came into being just after the Civil War. A group of young actors initially formed a social club to elude New York City’s strict Sunday tavern hours of operation. Theatrical shows would end too late for them to grab a drink after a show.

The Jolly Corks, as they were originally called, evolved into a charitable civic group through tragedy. One of the original members died, leaving his widow and children destitute, and they all chipped in to ease her financial stress. This moment transformed their organization from the social Jolly Corks to the service-oriented Elks.

Memberships in civic organizations such as the Elks or Masons or Rotary Clubs peaked across America after both world wars, and they began falling in the 1960s when Americans began shedding fraternal socialization and front porches for television shows in their living rooms and backyard decks.

Since the late ’90s, all of them have rapidly faced near extinction, thanks to the isolating effects of gaming and smartphones, and the anti-social components of social media. These things erase that sense of community, security and civic duty that fraternal organizations can cultivate.

By 2012, the membership at this Elks had hit a low, only 340 members remaining, and most of them were closer in age to 80 than to 70. The community was ebbing in fast-forward, and that social capital was evaporating.

And something else was fading: the tradition of elders sharing stories, sometimes tall tales, passing on their wisdom and experiences to the young people in the community. It’s the kind of knowledge and information you can’t Google or ask Alexa to find for you, the kind of knowledge that shapes the character of men and women and a community.

Today the membership is nearly double its 2012 low point. Weekly outside events like Banjo Night and the monthly jazz and bluegrass nights bring the crowds.

Annual events like the Lenten Fish Fry and the very popular Johnny Cash Night, which always falls on the late crooner’s birthday (Feb. 26) and typically features several Cash cover bands, have raised enough awareness about what Elks actually do that membership has soared.

And the scope of its work, all volunteer, is astounding, from supplementing federal food stamp deficiencies for the local poor, to summer day camps for at-risk kids, to youth drug-awareness programs, to veterans programs, to visiting nurses, to a holiday charity drive.

There was even a luggage charity drive to collect gently used luggage, totes and book bags for foster children transitioning between homes and women transitioning in or out of women’s shelters. This provided more dignity than the black trash bags Health and Human Services provides.

They also raised money for the victims of Hurricane Maria in Puerto Rico and for the Tree of Life Synagogue Victims & Families Fund in the aftermath of the mass shooting this fall.

All of these only touch the tip of the iceberg of the philanthropic work this one lodge does, with many of the new members having first walked through the lodge doors on Banjo Night, looking for a place that could become a second home of sorts, a place to connect with people they were somehow missing in their lives.

Too often people think that to make significant change in the world they have to get involved in global issues or lobbying the central government. What they miss is that most things that improve the world begin in a small community civic organization like this Elks—even something like helping homeless veterans get a free haircut, interview clothing, and housing until they get on their feet.

That vet or the kid who gets a scholarship through the Elks will, in turn, keep alive the notion of service and go on to improve the world in his or her own way.

Ray Link, the young “exalted ruler” of this lodge, says there are a dozen or so new members about to be sworn in to this Elks beginning in 2019. Even the mayor of Pittsburgh, Bill Peduto, has been a member in good standing for a couple of years.

Joining has been something Americans have been doing for centuries. In the past decade, we’ve sadly replaced our participation in churches and civic organizations with a heavy participation in politics and social media, neither of which really does much for us or our communities.

But now, civic life in America is making a comeback.  That’s welcome news as we greet the new year of 2019.

Salena Zito is the author of The Great Revolt: Inside the Populist Coalition Reshaping American Politics, highly praised in TTP’s What to Read 2018 (12/27/18).