2 The Point News » Guest Authors » Members Only » AMERICA, WE ARE LEAVING

AMERICA, WE ARE LEAVING 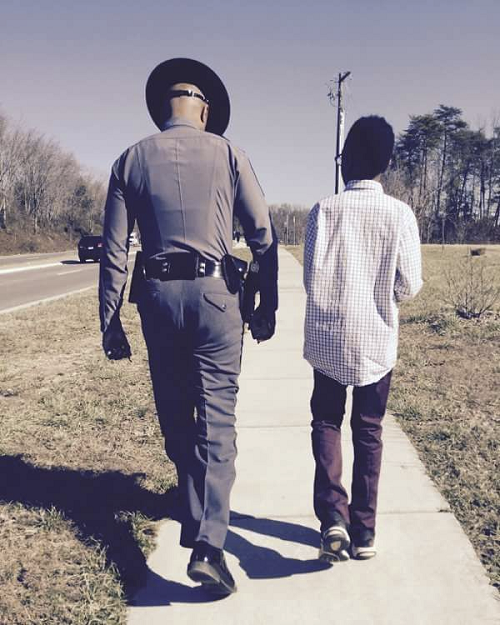 This is the hardest thing I have written.

I grew up in a law enforcement family. My father worked his way up to the rank to Captain at the Ft. Smith, Arkansas Police Department. As I kid I remember going with him on Friday to pick up his check and I was in awe of these super heroes he worked around.

They were funny and fun to be around. Men and women of all races all with the same mission, to make the community safer.

My dad sacrificed a lot and so did my late mother.

Whether it was the week long surveillance or wiretap or chasing drug runners across the country, he gave it all for my family and worked plenty of extra details to never let our family be without. Some would call that privilege but where I grew up, it was called hard work.

The kids at school thought it was cool what my dad did and while he sometimes asked me if anyone gave me a hard time, they never did. There was a respect among all…. even the kids in shop class.

After four years of college my dad wanted me at an agency that respected that education so I moved to Tulsa, Oklahoma at 21 years old and never looked back.

I didn’t know anyone and all I knew was what I saw my dad do, work hard and treat people with respect. I saw a lot of other cops working hard as well and doing all they could to keep the community safe.

27 years has passed and if you would have told me the condition of law enforcement today, I would have never believed you.

It’s not that law enforcement has changed for the worse but everything around it has.

The mentally ill used to get treatment and now they just send cops. Kids used to be taught respect and now it’s cool to be disrespectful.

Supervisors used to back you when you were right but now they accuse you of being wrong in order to appease crazy people.

Parents used to get mad at their kids for getting arrested and now they get mad at us.

The media used to highlight the positive contribution our profession gave to society and now they either ignore it or twist the truth for controversy to line their own pockets.

There used to be a common respect among criminals. If they got caught, they understood you had a job to do but now it’s our fault they sit in handcuffs rather than their own personal decisions.

If someone attacked a cop, they were seen as such. Now we martyr them and sue for millions.

We used to be able to testify in court and we were believed. Now, unless there is video from three different angles, no one cares what you have to say.

With all this talk about racism and racist cops, I’ve never seen people treated differently because of their race. And while I know that cowards that have never done this job will call me racist for saying it, all I’ve ever seen was criminal behavior and cops trying to stop it and they didn’t give a rip what their skin color was. 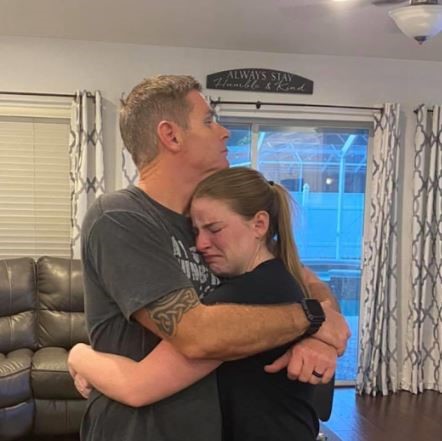 The Founder of Blue Line Bears is broken as she recognizes
that the world hates her Dad just for the uniform  he wears.

I’ve seen cops help and save any type of race, gender or ethnicity you can think of and while that used to mean something, no one cares anymore.

I’ve been called every name you can think of and many of them with racial overtones and it’s never come from cops. I’ve watched African American cops take the brunt of this and even talked one rookie out of quitting after he was berated by a lot of cowards that had the same skin color as him.

I’ve heard words I never heard before being a cop.

Uncle Tom, Cracker, Pig and the N Word just to name a few. I’ve heard them thousands of times and never once did I see a police officer retaliate.

They just took it.

Despite that, it’s been the greatest opportunity of my life to do this job. I would have recommended it to anyone and I secretly hoped one of my kids would do it one day.

They would have been a 4th Generation Cop.

But today, all of that is over. I wouldn’t wish this job on my worst enemy. I would never send anyone I cared about into the hell that this profession has become.

It’s the only job you can do everything right and lose everything.

It’s the only job where the same citizens you risk your life for hate you for it.

It’s the only segment left in society where it’s cool to discriminate and judge, just because of the uniform you wear.

You never get to explain.

You can never reason with them.

The nasty words have now turned into rocks and bottles and gunfire.

I’ve watched it happen to those around me and I have seen the total destruction of their life.

This job is a walking a time bomb and you could get cancelled or prosecuted on the very next call, even if you do everything right.

No profession has to deal with that.

Doctors kill 250,000 people a year. They call them “medical mistakes” because society understands that they do a very difficult job under high stress and they must make the best possible decision in the moment.

Law enforcement is tasked with the same and we are highly successful. Despite the most violent society we have ever seen, less than 1,000 suspects are killed a year.

I’ve seen cops risk their own lives when they shouldn’t have…….just to keep from taking one.

They never get the credit that other professions get.

Cowards are all around us. From chiefs to sheriffs to politicians, no one has our back.

Now, the little we have, we are told they are going to defund us or even abolish us. Citizens with a political agenda will reign over us and all you have to do is wake up and put on a uniform to be a racist.

This weekend I received death threats for just doing my job. It would have been outrageous a decade ago and made national news.

There will be more threats, more accusations of racism and more lies told about us.

I used to talk cops out of leaving the job. Now I’m encouraging them.

It’s over America. You finally did it.

You aren’t going to have to abolish the police, we won’t be around for it.

And while I know, most Americans still appreciate us, it’s not enough and the risk is too high. Those of you that say thank you or buy the occasional meal, it means everything.

But those of you who were silent while the slow turning of the knives in our backs happened by thugs and cowards, this is on you.

Your belief in hashtags and memes over the truth has and will create an environment in your community that you will never expect.

If you think Minneapolis will turn into Mogadishu and that is far from you, it’s coming.

And when it does, remember what your complicity did.

This is the America that you made.

Travis Yates is the Commander of the Tulsa Police Department.  He is Editor of Law Officer (lawofficer.com), where this article was first published, and author of The Courageous Police Leader: A Survival Guide for Combating Cowards, Chaos, and Lies. An International Law Enforcement Educators and Trainers Association (ILEETA) Trainer of the Year, his Seminars in Risk Management, Leadership & Officer Safety have been taught across the world.