AMERICA NEEDS A FOREIGN POLICY AS SERIOUS AS IRAN’S 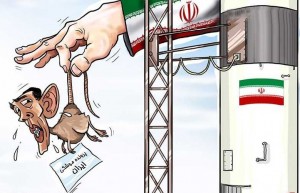 [ssba]Victims of terrorism, notably the survivors of 9-11, have sought to use the courts to seek compensation for their losses. But lawsuits brought against governments that sponsor and support terrorism run into a roadblock.

The doctrine of sovereign immunity prevents U.S. citizens from bringing suit against foreign governments. Among other considerations, that doctrine is based on the assumption that the U.S. government will do the job of protecting American citizens from state sponsored terrorism rather than telling them to “go it alone.”

Additionally, the United States is now negotiating and working with the very state supporters of terrorism—especially Iran—that American citizens seek to bring to court.

Under the JASTA legislation (Justice Against Sponsors of Terrorism Act, sponsored by Sens. John Cornyn, R-TX, and Chuck Schumer, D-NY) now before Congress, the bar of sovereign immunity would be removed in a case of state sponsored terror that takes place on United States territory, and would give American courtsthe power to seize foreign government assets in America.

That would lead, of course, to reciprocal lawsuits in foreign courts that name the U.S. as a state sponsor of terrorism and the subsequent seizure of American assets. A series of such suits and counter suitswould confuse the issues and do little, if anything, to redress the grievances of victims of terrorism.

It is not as if we need evidence of what nations are sponsoring terror attacks against us. Whether the attacks of 9-11, the Khobar Towers bombing, and the attacks on our embassies in Kenya and Tanzania, Iran was the prime culprit, in addition to the thousands of American soldiers maimed and killed by IED’s strewn all over Iraq and Afghanistan by Iranian agents.

Clearly, delivering American justice to state sponsors of terrorism is a job for the U.S. government. Regarding 9-11, Washington could have sequestered funds ofthe Iranian government—oil revenues held in “escrow” under sanctions against Iran—and given it to American citizens as just compensation for their losses.

Besides, relying on courts to deter state sponsors of terrorism concedes the initiative to terrorists, since courts can intervene only after the fact, and that may take decades. We saw that in the case of Libya’s Muammar Ghaddafi 1998 bombing of Pan Am flight 103 over Lockerbie.

In addition to foreigners, some Americans share Jane Fonda’s view that America was a war criminal that sponsored terrorism during the war in Vietnam, just as some Americans today view U.S. policies in Afghanistan, Iraq, Syria, Yemen and elsewhere as terrorism and war crimes.

Opening the courts to lawsuits by such people would be the inevitable result of passing JASTA, no matter how hard the law’s proponents try to craft the legislation to limit what the courts can consider.

But the JASTA legal quagmire illustrates something even more important: Washington’s policy regarding state sponsors of terrorism is schizophrenic. As a result, our government is failing in its duty to protect Americans from terrorism.

On the one hand, many Gulf States are our allies, even though their private charities support building mosques that bring rhetorical support and incitement for violent jihad to America. Some of those states, like Saudi Arabia, are beginning to reform those charities, giving hope for further growth of today’s cooperation with them on counter-terrorism.

On the other hand, U.S. policy is seriously counter-productive in the case of Iran.

If the Joint Comprehensive Plan of Action (JCPOA, Obama’s Iran nuclear deal)) was truly able to prevent Iran from building nuclear weapons, looking the other way while Iran builds ballistic missiles and supports terrorism might be considered unpalatable, but nonetheless necessary if that were the only choices before us.

But the JCPOA only delays Iran from reaching its goal of becoming a nuclear-armed state sponsor of terrorism—which all evidence suggests is happening rapidly. The effect on Middle East security is already devastating.

By our inaction, we are helping Iran create a Shia crescent from Iran to Iraq to Syria to Lebanon and to the Mediterranean Sea, an arc dominated by Iran and its terror proxies that jeopardizes the entire Middle East and especially the US allied oil producing states.

Lack of vigorous action against the terrorism and destabilizing activities of Iran and its proxies stems in part from the reluctance of Americans to find more dragons to slay. And confronting Iran is assumed by the media class as meaning invading Iran. So we never even begin a discussion of what our policy should be on Iran so we muddle through. And this has been for the past five administrations.

But even in the face of the tendency to believe the U.S. does not have dog in the Middle East fights, we cannot escape the consequences of ignoring the energy economics stemming from that troubled region.

Despite the U.S. success in becoming the number one producer of oil and gas in the world, the production and shipping of hydrocarbons in the Middle East must remain a top concern of Americans—two thirds of the world’s conventional oil and gas resources lie in the Gulf area. And every day, one-third of all the oil produced there travels on vulnerable tankers through two Middle East waterways.

If an aggressive power—like Iran—dominates the oil-rich region, that nation will have the industrial economies of the world by the throat, greater than the control OPEC had after the 1973 oil embargo.

Iran already sits alongside the Strait of Hormuz through which nearly 20 million barrels of crude pass daily. And Yemen, to the west,is next to Bab al-Mandab,the waterway linking the Gulf of Aden to the Red Sea and the Suez Canal, through which another 7 million barrels a day must pass to Asia and Europe and elsewhere.

During the first decade of the 21st century, Middle East conflicts resulting from Iran’s use of proxies and terror organizations raised the price of oil at least $30 per barrel. That resulted in a $28 billion windfall for the mullahs in Iran each year. That’s to say nothing of the role that $148 oil—reached July 4th, 2008—played in the economic recession of 2008 that plunged the U.S.economy to its worst level since the Great Depression.

If those conditions are recreated, Iran’s annual windfall will be $95 billion if Iran exports just 2.6 million barrels per day.

Bad enough that Iran continues to destabilize its Middle East neighbors and to increase activities of its terror proxies in the region. Bad enough that Russian warplanes use Iranian military bases to conduct airstrikes against Syrian targets while traveling through Iraqi airspace.

Contrast that with some American security specialists saying they would recommend we shoot down Israeli airplanes traveling through Iraqi airspace if they were conducting strikes against Iran.

US policy should not assist Iran to expand, to build nuclear-tipped missiles, and to endanger not only our Gulf and European allies, but the economic well-being of 330 million Americans.

Much as we might wish to wash our hands of the mess in the Middle East, it is connected to us in ways that make U.S. policy in the region of critical importance to the health of the American economy. American policy now embraces Iran and distances us from traditional allies like Israel, Egypt, and Saudi Arabia.

That policy has already resulted as we have noted in Russia using Iranian air bases to bomb targets in Syria, helpingto cement the Assad regime into place and furthering Iran’s ambition to be the hegemon of the Middle East.

Outsourcing U.S.foreign policy to Iran and Russia, or to courts here at home, is the wrong way to go. A pivot to a sound U.S.foreign policy is needed, and it should begin with understanding that Iranian chants of “Death to America” are deadly serious.

Peter Huessy is President of GeoStrategic Analysis, a defense consulting firm. He is the National Security Fellow at the American Foreign Policy Council, and Senior Defense Consultant at the Air Force Association.