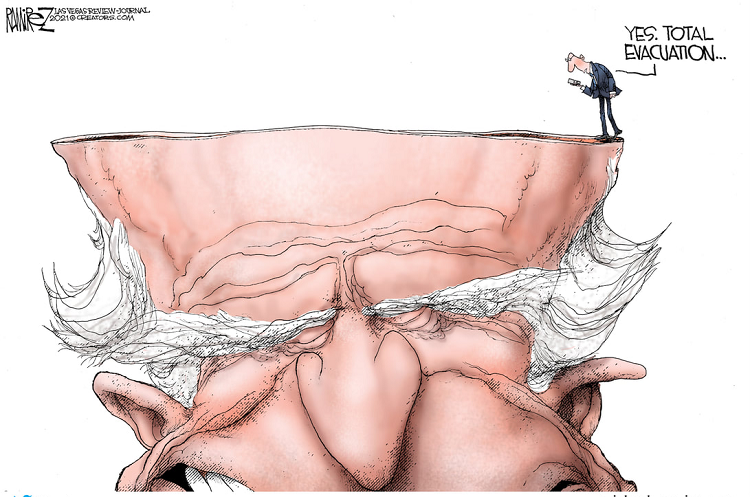 As the Afghan Fubar continues to worsen, here’s something to consider. We’ve done this three times since 1975, all to horrific results for those who were left.  What is the singular constant of those last 46 years?

Joe Biden was somewhere in the decision tree.

First as a US Senator from Delaware, who along with his senate majority refused to fund military support to the South Vietnamese.

Second came in orchestrating the withdrawal from Iraq in 2011 as O’Bama’s VP.  That withdrawal gave us ISIS.

Final withdrawal is from Afghanistan, which is still underway.

Biden has been described as a not so bright guy, who jumps to snap judgment and clings to that decision like a drowning man regardless of what may come of it.  He appears to have made up his mind in 1975 and has refused to allow reality to intrude for the subsequent 46 years.

As the Afghan debacle proceeded, it appeared that all the Harris – Xiden decision makers chose to do the wrong thing, or nothing at all. Did they know something huge, hidden in plain sight, that nobody else knew?  Was there a secret deal in place between Harris – Xiden and the Taliban?

The answer is no, not at all.  They simply screwed up in one of the largest foreign policy debacles since Bush 41-era diplomat April Glaspie all but invited Saddam into Kuwait.  Proof of this is the response of the Taliban itself.  Had they simply stood out of the way and allowed the US to withdraw all American civilians, they would have been given the keys to the kingdom.

They chose otherwise and are busily turning the entire nation into a giant hostage situation, which will be one of their (many) undoings.

One ancillary question:  Why are there so many Americans in A-stan?  Better yet, why did they not start evacuating when Trump announced his drawdown last year?

The quick fall of the Afghan government demonstrates yet another massive failure from the intel community including the CIA.  Apparently, they spent too much time and energy cooking up grist for the democrat impeachment mill to actually concentrate on doing their assigned mission.  No firings in the intel community as yet.

And who can forget the current SECDEF and Chairman of the Joint Chiefs of Staff, who apparently believe their current mission is conducting a purge of Trump voters, aka “white extremists,” from DoD?  They also are heavily pushing BLM / CRT and the LGBTQWTF world on military members.

When you spend all your brain cells concentrating on the wrong stuff, there is not much left over for anything else.  And there isn’t.  So far, no resignations from the upper levels of DoD.  Don’t expect any.

Now there may be an explanation for military leadership hanging on and refusing to take the honorable way out.  It could be that they want to retain their offices to protect as best they can, the fighting force from the maladministration of Harris – Xiden.

That excuse first showed up during the O’Bama years.  Given the Leftist worldview of these four-stars, I tend to believe DoD leadership and the General Officer corps are simply Woke Leftist and either agree with the new direction or simply like their positions, their pay and authority.  Perfumed Princes, indeed.

Among really foolish (treasonous?) decisions made was abandoning Bagram Air Base in the middle of the night.

This was the crown jewel, the largest military air base in the region, completely defensible.  Xiden gave an order to abandon it, and the US garrison left literally in the middle of the night.  The commander of the Afghan side didn’t figure that out for a couple hours after the US was gone.

Evacuations from Bagram would go a lot better than from Kabul International, far more defensible.  It was necessary for Air Force ground support operations — and could have provided a very lethal deterrent and response to Taliban hostage taking.  Think of the Hellfire missile assassination of Iran’s general Soleimani times 100 or 1000 aimed at Taliban leadership if they interfered with the evacuation of Americans and the Afghans who helped them.

Jack Wheeler noted that the Afghan air force disappeared, and nobody knows where they went.  Speculation is they are dispersed in neighboring nations.  Note that when Bagram AB was shut down, the Afghan military (and the US) lost the ability to conduct close air support in country, yet another reason for the quick dissolution of the Afghan army.

In their continuing effort to purge all things Trump from the US government, Harris – Xiden officials canceled a Trump-era emergency program set up to protect and evacuate American citizens stationed overseas in the event of an emergency.  Given the way Trump and his people did things like this, I do expect this would have worked at least decently.  But when you have no plan at all, you end up with people grabbing onto aircraft while they take off and drop to their deaths.

Who was behind the Taliban?  Who is funding them?  Supporting them?  Providing logistics for them?  And why?  Looks like the CCP is the big backer of the Taliban, working through their mini-me’s in the Pakistani ISI and directly with the Taliban.

If you think of the Taliban as the functional equivalent of Mexican drug cartels, you are close to who and what they are.  Taliban make a lot of money from the heroin trade.  Who is in position to put the Taliban out of business instantly?  The CCP with their fentanyl production.  Flood the marketplace with fentanyl, and the heroin marketplace is destroyed.

The why is more interesting, and it has to do with rare earth metals and lithium available in Afghanistan.  The CCP continues along the road of locking up as much production of both as possible, giving them a monopoly position, while here in the US, Harris – Xiden are busily obstructing as much mining as possible via environmental laws.

Would Trump have done a better job?  Could he?  I think the answer is an emphatic Yes!  He had an evacuation plan in place.  He already had an arrangement with the Taliban in place, one that promised real consequences if the Taliban did anything ugly.  Trump would have made a hard decision and simply told us.

And if the Taliban had decided to do anything to grab and hold Americans, Trump would have treated them just like he treated ISIS, killed as many of them as he could find, and keep it up until they were all gone.  Even those in Pakistan.

Lastly, it didn’t take the CCP long after the fall of Kabul to start running their collective mouths at Taiwan, claiming that their military will quickly collapse and the US military will not come to help.

The Chicoms need to be very careful what they are asking for, as should they hit Taiwan with anything, the resulting response may very well be much larger and more different than they anticipate.

China is surrounded by nations, most of whom hate them to varying degrees.  The only difference is how much or how little that hatred goes.  Burma, Russia, Pakistan and the North Koreans (a Chinese client that Trump tried to peel off) are the only ones on the little side.  OTOH, they have managed to irritate everyone else, four of whom are either nuclear nations (India) or could be within weeks (Taiwan, Japan, South Korea).

Taiwan also is one of the world’s most productive chip manufacturers, something the CCP tried to do and failed miserably at.  Attack Taiwan, and that ability disappears completely, which will hurt the rest of the world a lot, but chip-dependent CCP military more.

Finally, I suspect that the Taiwanese have most if not all of the 3,000+ families running the CCP located and targeted.  Wouldn’t want to invite a decapitation strike or encourage your neighbors to arm up with nukes by letting your alligator mouth overload your hummingbird @$$.

Pure speculation on my part, but it wouldn’t surprise me at all if Trump and his foreign policy team didn’t pull the same sort of anti-CCP coalition together along the Pacific Rim that they did with the Middle East via the Abraham Accords.

But that’s because @realPOTUS is an American patriot, and the Chicom Puppet Impostor in his place is treasonously not.

Alex Gimarc lives in Anchorage since retiring from the military in 1997. His interests include science and technology, environment, energy, economics, military affairs, fishing and gardening in the Alaska summer.