A THANKSGIVING BOUNTY OF HUMAN PROGRESS

Your Thanksgiving dinner this Thursday (11/26) is going to be less expensive.

This is the great beauty of the capitalistic system — in real terms, as measured by the time necessary to work to buy most anything, the price falls year after year.

If you wonder who calculates stuff like this, go the website HumanProgress.org, and you will find how my Cato colleague Marian Tupy put together the numbers. Many of the good-news facts that follow were put together by Mr. Tupy and his colleague Chelsea German and can be found in more detail at the Human Progress website.

There are terrible headlines about terrorists’ acts, along with claims that too much bacon, pesticides, radon or genetically modified food are going to cause cancer, and you are going to die as a result. Most of the scare stories are just not true in that a little bit of anything is unlikely to do you much harm and too much of anything will.

Almost 3,000 Americans were killed by Moslem terrorists in 2001 (one in every 101,000), but the rate that horrible year was still less than one-tenth of the chance of getting killed in an automobile accident.

In the years since, only a few-dozen Americans have been killed in the average year by Moslem terrorists — terrible for those involved, but only a tiny risk to most people.

Life expectancies have continued to grow both in the United States and worldwide (an amazing average increase of about three months per year for the last 150 years) — despite all of the scare stories about what is going to do you in. Life expectancy is a good proxy for overall levels of health. 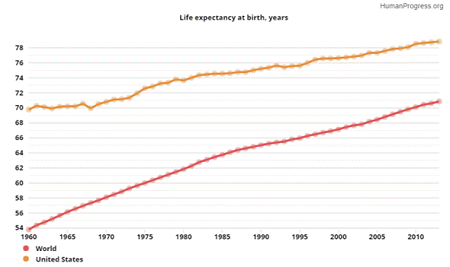 Real gross domestic product per capita (inflation adjusted) is now about three times higher than it was in 1950, and can continue to increase forever because of endless innovation and productivity growth (which, of course, is dependent on sensible economic policies).

For my entire lifetime, I have been reading stories of how the world is going to run out of food and that there will be mass starvation. It is true that there used to be famines in places like China and India, but now both export some foods.

As recently as 1962, there were 51 countries where people consumed less than 2,000 calories per day; but in 2011, only Zambia was left on the list, and that was due to an incompetent and corrupt dictator who prevented his citizens from taking advantage of what had been a rich agricultural country.

There is no free-market country (as contrasted with socialist countries) where there is any danger of a food shortage.

The global problem of increasing obesity is now a much greater danger for most people than starvation — but go ahead and enjoy Thanksgiving, it only comes once a year!

Global food production has been growing faster than population for decades with no end in sight. World population growth is slowing, and within a very few decades it is likely to decline as it already has in countries such as Japan, Italy, Spain and others.

New World Bank data shows that world poverty will fall to a record low of only 9.6 percent this year, or about one-fifth of its level as recently as 1980. The fall in poverty is closely related to the rise in world economic freedom over the same period.

Countries giving up socialism for free markets and moving toward free trade accounted for most of this improvement.

Most people are aware of how the invention of the semiconductor has greatly enhanced most everyone’s well-being by making all of the world’s information almost free and instantaneous — think of the iPad and smartphone.

But there is another miracle that is often taken for granted — and that is air-conditioning. Productivity falls as temperature rises above an optimum — as anyone who has experienced an air-conditioning outage in a factory, office, store or home knows. Without it, many of the tropical areas of the world would still be poor. Imagine Singapore or even Florida without air-conditioning.

Finally, the really good news is that advances in the biological sciences are rising like computers at an exponential rate — which means that most aliments are likely to be cured within the next few decades, including the aging process.

The bottom line is that human progress enables the average person to live a richer, healthier life. That’s a lot to be thankful for this Thanksgiving.