2 The Point News » Kelly's Panorama » A SCANDAL OF DEMOCRATS

A SCANDAL OF DEMOCRATS 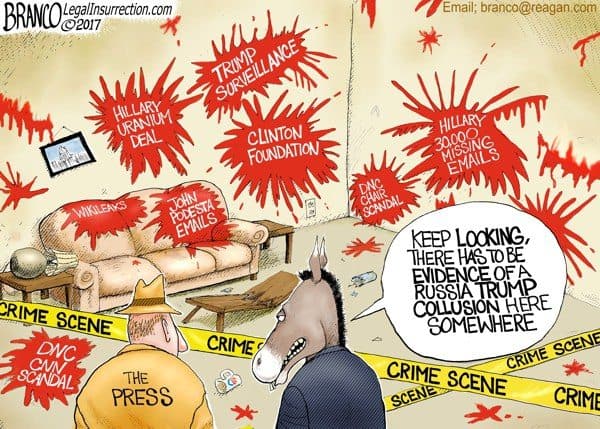 If a tree falls in the forest, but no one is there to hear it, does it make a sound?  Not if it’s a Democrat scandal.  It’s gotten so that “scandal” should be the collective noun for Dems – like a school of fish, a leap of leopards, a pride of lions, a scandal of Democrats.

If any of these five scandals got half the attention Watergate did, each would be considered the worst in American history.

(2) Illegally surveiled the Trump campaign and the Trump transition team.

This breathtaking abuse of power arguably is a seditious conspiracy under 18 USC 2384, punishable by up to 20 years in prison.

The Obama administration approved in 2010 the sale of 20 percent of U.S. uranium reserves to a company controlled by Russians, despite the fact “the FBI had gathered substantial evidence that Russian nuclear industry officials were engaged in bribery, kickbacks, extortion and money laundering.”

Uranium One is a Canadian mining firm whose biggest shareholder is the Russian nuclear giant Rosatom. The sale was approved after Rosatom and Uranium One execs donated millions to the Clinton Foundation.

The sale was approved by the Committee on Foreign Investment in the United States, which is chaired by the Secretary of the Treasury, includes the Attorney General, the Secretaries of State, Defense, Homeland Security, Commerce, and Energy, and the U.S. Trade Representative.

Justice did not inform other members of CFIUS of the criminal activity the FBI found. Obama Justice threatened to jail FBI informant William Campbell if he told Congress about what he uncovered.

The Iranian-backed terror group Hezbollah makes upwards of $1 billion a year in the U.S. from smuggling drugs and weapons, and money laundering.

The Drug Enforcement Administration launched Project Cassandra in 2008 to map Hezbollah’s networks, from the Middle East to Latin America to here.

When DEA was ready to roll up the networks, senior officials in Obama Justice refused to file charges against the major players. A crackdown on Hezbollah could jeopardize Obama’s nuclear deal with Iran.

“They serially ripped apart this entire effort that was very well supported and resourced, and it was done from the top down.”

Pakistanis working as IT techs for Democrats made thousands of “unauthorized” logins on the House computer network.

The Awans were locked out of the House computer system Feb. 2, 2017.  Imrin and Hina were arrested in July and charged with bank fraud. Their Democrat employers were remarkably slow to fire them. Were the Awans blackmailing them?

The Awans have ties to the Pakistani ISI, and to Hezbollah. Natalia Soya is Russian. Over the last 15 years, how many secrets may they have provided to our enemies?

The ostensible purpose of Operation Fast and Furious, begun in November, 2009, was to track guns from straw purchasers in the U.S. to the cartels. But once they crossed the border, ATF made no effort to trace the guns. They’ve been used to shoot more than 300 Mexicans, U.S. Border Patrol Agent Brian Terry, and ICE Agent Jaime Zapata.

The real purpose of Fast and Furious was to build support for gun control in the U.S., many think. The only ATF agents punished for this fiasco were whistleblowers who told Congress about it.

Senior Justice Dept. officials lied to Congress about Fast and Furious, stonewalled requests for documents. In April, 2016, a federal judge ordered DOJ to produce them.

Most Americans don’t know about these scandals because the MSM haven’t reported them. This may be the biggest scandal of all.

The most difficult task facing President Trump in draining a swamp much deeper, wider, and more fetid than we imagined is how to get the truth past the MSM Bodyguard of Liars?

A related task is how to get Americans – most of whom are decent, trusting souls, but who are not well informed, or very smart – to grasp the mind-boggling scale of the evil deeds of the Leftist Elite.

Those who’ve voted for Democrats will learn everything they’ve believed is a lie. The cognitive dissonance will be enormous. As Mark Twain said: “It’s easier to fool someone than convince them they’ve been fooled.”

President Trump, and as yet unsung heroes Michael Horowitz and “Stealth Jeff” Sessions have prepared the battlefield about as well as it can be done.

The plan is to present the evidence in ways the MSM have to cover, and to flood them with so much they won’t have time to spin it.

Horowitz, the DOJ inspector general, was able quietly to gather a damning amount of evidence — 1.2 million pages of documents – because POTUS and “Stealth Jeff” sent the MSM chasing the rabbit that was the Mueller investigation. It wasn’t until it was too late to cover their tracks that the black hats in FBI/DOJ learned they were the targets of the real investigation.

After Nunes, Goodlatte and Senate Judiciary Committee Chairman Chuck Grassley titillate us for a few weeks, (but before a Special Prosecutor is named), the entire IG report will be made public.

The Horowitz report probably will deal with Fast and Furious too, because that’s the scandal that prompted his investigation.

It won’t take long for the Special Prosecutor to issue indictments, because Horowitz already has enough evidence to send malefactors to Leavenworth. (If he’s healthy and sober enough, I hope the SP will be Rudy Giuliani.)

Meanwhile, Stealth Jeff will revoke immunity for Hillary aides Cheryl Mills and Huma Abedin, because they lied to the FBI. A news cycle or so later, Mills and Abedin will be indicted for mishandling classified information.

An indictment in the Uranium One scandal was made public last Friday. That indicates the investigation was reopened months ago.

When Stealth Jeff says he’s thinking about doing something, he’s already done it. As a U.S. attorney breaking the back of the KKK in Alabama, Sessions was called the Silent Assassin.

The Storm has begun.  It’ll grow exponentially over the next few weeks, likely will culminate with Hillary, Bill, maybe even Zero wearing orange jumpsuits.

It’ll be a year or more before that happens. It takes time to work up the food chain, and to prepare public opinion for what, just two months ago, was unthinkable.

Be patient. Justice will be done because POTUS and his allies have taken the time to build strong cases, to diminish the credibility of our enemies, to prepare the battlefield for the wild ride ahead.