A PERFECT STORM SEEKS DESTRUCTION OF THE USA 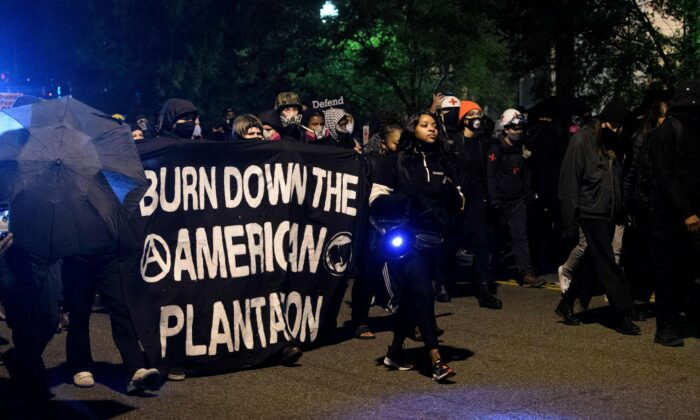 As 2021 dawns, the war on our culture moves into high gear.

The opportunistic intersection of the resistance to the Trump presidency, the rise of the monopolistic tech giants, the spurious panic over the psychologically weaponized Communist Chinese Virus and its concomitant loss of personal freedom, the neo-Marxist hijacking and worsening of race relations, and the legalistic undermining of U.S. laws and institutions have all evolved into a perfect storm of destruction that not only threatens the future of the United States, but actively seeks its destruction.

It’s clear now that the destruction of classical Western Civilization, of which the United States was once the apogee, is, in fact, the goal of the post-Rousseau, post-Marx, post-Frankfurt School Left’s political philosophy.

That it’s a loser’s philosophy based on underachievement, ineptitude, resentment, hostility, and psychopathy matters not.

Unable to successfully compete in the arena of accomplishment and civilizational progress, they prefer instead to tear it apart and burn it all down in the name of “social justice,” when what they mean is simply revenge.

They themselves are never to blame for the various parlous conditions in which they find themselves. Whether it’s measured by standards of living, technological accomplishments, medical advances, or cultural artifacts from Homeric Greece to Caesarean Rome to medieval Paris and the founding of the universities to the Italian Renaissance to the European Enlightenment to the high-water marks of Victorian Britain and Bismarckian Germany, they have contributed very little, although our culture from the time of the Romans has always been open to all.

Most recently, in my current bestseller, “Last Stands,” I have sought to limn the circumstances of some of the great battles for and about our civilization and to illustrate the reasons why some men have fought to the end to preserve our civilization, and our way of scientific, intellectual, artistic, and moral way of life. And that reason is: because it was worth it.

We might call this patriotism, or at the very least enlightened self-interest and national pride. On the Malignant Left, however, it’s decried as “jingoism,” “racism,” “white supremacy,” and other odious epithets, as if Western Civilization weren’t a magnificent achievement, but a plot against the planet.

“Systemic” even, as the current voguish parlance might have it.

Thus it is that a journeyman political reporter, Dan Balz, can write with a straight face in The Washington Post: “For Trump supporters, cultural preservation of an America long dominated by a White, Christian majority remains a cornerstone of their beliefs. That helps to explain their attachment to a president who has warned that the Democrats and their allies are determined to rewrite the nation’s history and destroy its heritage.”

[Note by JW:  Balz is, of course, completely white himself, another Self-Hating White Male of the Left]

That the United States as a political entity was founded by white Christians—and, Balz might have added, males from the British Isles—and nobody else, never seems to occur to him. On the Left, there is no room for facts in their cosmogony, only malicious motives regarding things that somehow just sprang into being, like Athena from the head of Zeus.

But the fact is, Democrats and their allies (BLM, Antifa, socialists, and neo-communists) really do want to rewrite the nation’s history and destroy its heritage.

The riots and cultural revisionism of 2020 surely prove that.

It seems that nary a week goes by without some surly crackpots on what we might call the Culturally Inadequate Left wishing to pull down yet another pillar of our culture.

The latest comes from the People’s Republic of Massachusetts (how the home state of the American Revolution has fallen!), where Homer’s “Odyssey” and other classics have come under their basilisk gaze:

“A sustained effort is underway to deny children access to literature,” reports The Wall Street Journal (12/27). “Under the slogan #DisruptTexts, critical-theory ideologues, schoolteachers, and Twitter agitators are purging and propagandizing against classic texts—everything from Homer to F. Scott Fitzgerald to Dr. Seuss.

“I’d rather die,” tweets Seattle English teacher Evin Shinn, “than teach (Nathaniel Hawthorne’s novel) Scarlet Letter. Unless you are teaching about how to fight against misogyny and slut-shaming.”

“Challenging old classics is the literary equivalent of replacing statues of racist figures. (We must) prevent white children from imbibing prejudice. Children shouldn’t have to read stories written in anything other than the present-day vernacular—especially those ‘in which racism, sexism, ableism, anti-Semitism, and other forms of hate are the norm,”  young-adult novelist Padma Venkatraman writes in School Library Journal.

So now “canceling the classics” is a thing. Don’t laugh. For more than a half-century, we’ve snickered at such overt, proud philistinism. And yet here we are, with our culture on the chopping block for the crime of being unable to anticipate future grievances.

As I’ve long said, on the Left there is no idea too stupid or inimical for them to take seriously and act upon—that’s the very essence of so-called Critical Theory—and we ignore these lunatics at our continued peril.

For them, too much is never enough, and once they’ve fixed a destructive “principle”—Homer must go!—in their minds, there is no other cultural destination than straight off the cliff and into the wine-dark sea for everybody.

No surprise: The ideological bowdlerization of our cultural patrimony has been going on for decades. As a young critic nearly 50 years ago I observed that, once started on their project of revisionism and revenge, the iconoclastic cultural sappers wouldn’t rest until they had exhumed all the deceased objects of their animosity and hanged their corpses. I stand by the prophecy.

I’m often asked: Once they’ve accomplished the destruction of Western civilization in the name of the “marginalized,” with what do they propose to replace it? Ancient Chaldea? Ming Dynasty China? Wakanda? Or the Amazonian wonderland of Woman?

My answer is Alfred’s telling Batman in The Dark Knight: “Some men aren’t looking for anything logical, like money. They can’t be bought, bullied, reasoned or negotiated with. Some men just want to watch the world burn.”

[Note by JW:  Or perhaps Friedrich Nietzsche expressed it best in 1881:

“When some men fail to accomplish what they desire to do they exclaim angrily, ‘May the whole world perish!’ This repulsive emotion is the pinnacle of envy, whose implication is ‘If I cannot have something, no one can have anything, no one is to be anything!’”]

And so, in the name of “health,” they mask and muzzle us, restrict our freedom of movement and faith in the open defiance of the Constitution, vilify our culture, proscribe our words and thoughts, erase the canons of our arts and literature, destroy the middle class and their sources of livelihood, and tell us it’s for our own good. Because we’re so incorrigibly bad.