A PANDEMIC OF DELUSIONAL PSYCHOSIS 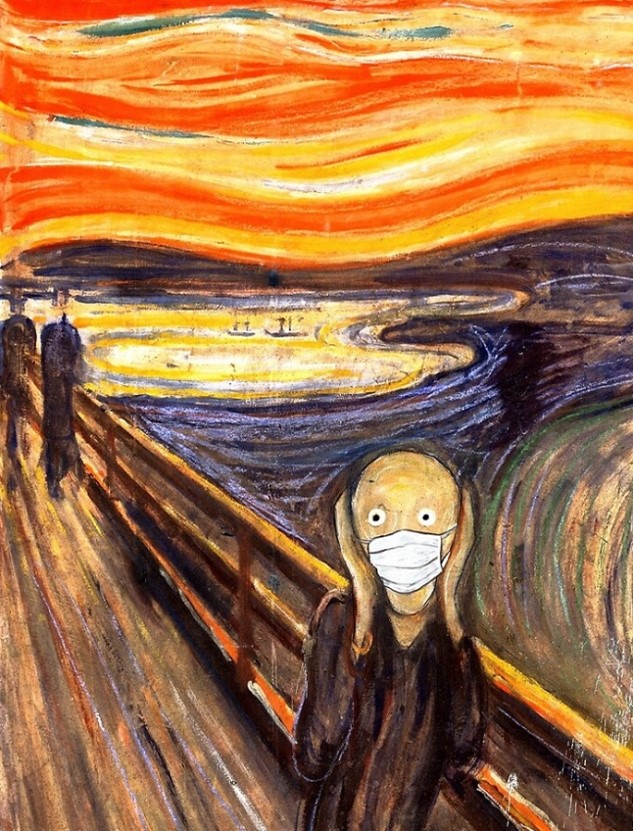 How have we come from “We have nothing to fear but fear itself” to “Fear is virtuous…and mandatory?”

From the beginning, fear has driven the government response to the coronavirus pandemic.  Americans have been told they should be afraid.  More important, they have been instructed that expressing fear, through the wearing of masks and self-isolation by the healthy, is their moral duty.

For the first time in United States history, fear is no longer seen as an emotion to overcome, like jealousy or greed, but rather as one to embrace.  We should be proud to be afraid, we are told, and we should call out anyone who isn’t.  In fact, any act of courage must be condemned as immoral as well as illegal.

Recently, I was asked by two masked adults riding the elevator in my office building to leave if I chose to not put a mask on.  I declined.

Out of curiosity, I asked them why it mattered to them that I wasn’t wearing a mask, as they clearly believed that masks protected them from the deadly coronavirus, and, since they were wearing masks, why my not wearing a mask should matter to them.

They had no answer to my question, other than to swear at me before announcing self-righteously, “It’s a sign of respect and courtesy.”  They appeared to be afraid.

As a practicing psychiatrist, I believe they were suffering from delusional psychosis — a fixed false belief contrary to reality.

This delusional state includes the superstition that masks protect healthy people from infection, that standing six feet apart from others saves lives, and that schools and businesses must remain indefinitely closed to “keep everyone safe.”

This delusional system of thinking has become so ingrained in the minds of most Americans that it resists all rational argument.  No evidence that challenges it will be considered by those who suffer from the mental illness.

This mass psychosis would be tragic if it affected only the sufferers themselves.  Its greatest danger, however, resides in what directly follows from it: group control.

In the beginning of the coronavirus government response, mandates issued by politicians and bureaucrats compelled behavior that served their interests of consolidating power.  Threats of fines and arrest intimidated the populace into compliance.

More recently, though, the threats and intimidation have emanated not from the government, but from everyday Americans, the delusional psychotic Americans, who direct self-righteous anger at anyone who dares challenge their fear-driven behaviors. They are psychotically managed by their fear.

In fact, simply displaying courage and rationality triggers violent reactions from these mentally ill people, who feel that it is their duty to mace maskless picnickers in the park or drag pregnant women by their hair from the local grocery store because they didn’t maintain the mandated six-foot distance from their fellow shoppers.

Recently, I was removed from a plane for spending “too much time” drinking from a cup of water without my mask on.  As I walked off the plane, the passengers applauded — not me, but the airline staff, for their virtuous action in punishing the one person on the plane who dared to show that he was not afraid or insane.

Government enforcement of irrational, arbitrary, and scientifically unsound mandates is no longer needed.  Group control by the population at large has been achieved.

Yet this fear-driven psychosis is so tragically unnecessary.  Federal data on China Virus deaths are highly suspect, because the CDC has acknowledged that 94 percent of the deaths attributed to it had an average of three co-morbidities, meaning they were probably going to die within the next six to 12 months anyway.

Further, more than half of those who died were 80 years old or older, while the average life expectancy, based on all causes of death, in the U.S. is currently 79 years.

So, if half of the people who have died purportedly of coronavirus are over the age of 80 and they had three or more co-morbidities, that speaks to the fact those people died with it rather than of it

In my clinical practice, I treat individuals who suffer from delusional psychosis with antipsychotic medication and therapy when appropriate.  How do we treat an entire population?

I have no easy answer to this question, but the treatment must begin with the rejection of fear and the embrace of courage.

It must topple the pursuit of safety from the altar of moral virtue and install in its place a reverence of freedom.  It must return us to a time when we confronted our challenges head-on, accepted necessary losses, and moved forward.

For unless this happens, we Americans, standing still, cowering, stand to lose everything.

Dr. Mark McDonald, MD, is a board-certified psychiatrist with a practice in Los Angeles.