A NEVER TRUMP DOOFUS GETS OWNED 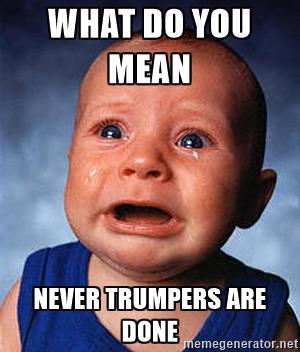 You should be ashamed of having published “The President Can Be Put On Tilt” on June 9. Even cash-strapped conservative journals of opinion should have editors and fact checkers.

According to Dougherty, “The very fact of the hearing was an unforced disaster for the president.”

Even Chris Matthews figured out the opposite is true.

*Why yes, I did tell the president three times he wasn’t being investigated, Comey said in public, on the record, under oath.

*No, Mr. Trump has never been the subject of an FBI criminal or counterintelligence investigation. News stories that implied he was are false.

Comey drove a wooden stake through the heart of the Russia collusion narrative, which is why the Left has moved on to the obstruction narrative.

If Comey had said this publicly in February or March, he might still be FBI director.

This focus group in Ohio didn’t think the hearing was an “unforced disaster” for the president.

According to Dougherty, Trump booted Bannon from the National Security Council because “Trump was bothered by the press about Bannon. You could still imagine the trolling and the demotion were merely a coincidence. I did, until Trump fired Comey.”

Bannon was removed from the Principals Committee. He still attends NSC meetings.  An easy fact to check. Why wasn’t it?

There’s been one story after another about “dysfunction” on the White House staff.

The Bannon-Kushner feud. Then Priebus was going to be fired. Then Sebastian Gorka’s head was on the block. Then Trump was “screaming” at McMaster. Then Kushner was in trouble. Then Priebus was in the hot seat again. Now Trump is said to be unhappy with Sessions.

Bannon and Priebus and Gorka and Kushner and McMaster and Sessions are still on the job.

Bannon and Trump are notorious for gaslighting. You should have Mr. Daugherty look up the word.

According to Dougherty, Trump “cannot calm himself down and let the cloud pass over his head with the next gust of the news cycle.”

Some Trump tweets have been ill advised. But more often than not, they have driven the news cycle. Comey said it was this tweet May 12 that prompted him to leak his memo about their dinner conversation Jan. 27.

CNN and the New York Times ran stories about what (allegedly) was said before Trump’s tweet. Since only Trump and Comey were present, the leak had to originate with Comey.

Comey may have perjured himself. He definitely broke FBI rules, may have disclosed classified information.

This was, according to Dougherty, Comey “calmly playing his cards in the weeks before and after he was fired”??

To assert Trump was harmed by Comey’s testimony, you have to assume his account of their conversation is the Gospel truth.

But Comey’s testimony undermined efforts to portray him as pure as the driven snow.

Trump’s lawyer says flatly “loyalty” was never discussed during that meeting. Do you think a lawyer as good as Mr. Kasowitz is reputed to be would make so blanket a statement if he didn’t have evidence to back it up?

And if Comey’s account of their meeting is 100 percent accurate, why is he spooked by the possibility Trump may have a recording of it?

It appears as if Trump’s tweet goaded Comey into committing a colossal blunder.

According to Dougherty, “The Saudis seem to have played Trump like a fiddle. Their cartoonish flattery of Trump seems to have led him to tweet angrily against the latest enemy of Saudi Arabia, Qatar, even though Qatar has been hosting the American military for 15 years”.

Qatar is the leading financier of Islamist terror, their banker, a “safe place” where terrorists wanted in other countries can relax in luxury.

Mr. Dougherty could have learned this with a few minutes research. He was too lazy to do it before popping off.

I was a Marine, a Green Beret, a Deputy Assistant Secretary of the Air Force. Nothing is more important to me than the security of the United States. Nothing ticks me off more than twerps like Dougherty who side with America’s enemies for domestic political reasons.

The al Udeid air base does not make Qatar a U.S. ally. The al Thanis are famous for double dealing. I was in Qatar for a couple of weeks before the invasion of Iraq in 2003, saw some of it firsthand.

Since Dougherty missed the obvious – that reining in Qatar is essential to defeating Islamist terror – I don’t expect him to notice the tectonic shift taking place in the Middle East.

Something I never expected to see in my lifetime is happening. During the president’s visit to Riyadh, the leaders of most Sunni majority countries declared the Dar al Harb is no more. The long overdue reformation of Islam is underway.

That Saudi Arabia is driving this train is especially significant, because ISIS, al Qaida, other Sunni Islamist terrorists derive their ideology from the Wahabbi/Salafi sects.

When even (some) Wahabbi clerics preach tolerance, and emancipation of women, there’s a tectonic shift happening.

The changes have been spectacular since Salman bin Abdulaziz al Saud became king on Jan. 23, 2015, and Mohammed bin Salman, his son by his third wife, became minister of defense.

“Our vision is a tolerant country with Islam as its constitution and moderation as its method,” bin Salman said in a 2016 interview.

Trump is the Rodney Dangerfield of presidents at home. But Arab leaders see him as a “strong horse” who can (help) bring peace to the region. Both the Saudis et al and the Qataris have praised his offer to mediate.

As for differences in tone between the president and Tillerson, kindly explain to Mr. Dougherty how “good cop, bad cop” works.

And here’s a pro tip for your writers: don’t opine on subjects you know nothing about.

Rich, you made a mistake when you hired this doofus. Ameliorate it by carefully editing his copy in the future.