A MODEST PROPOSAL FOR DEM BOYCOTTERS 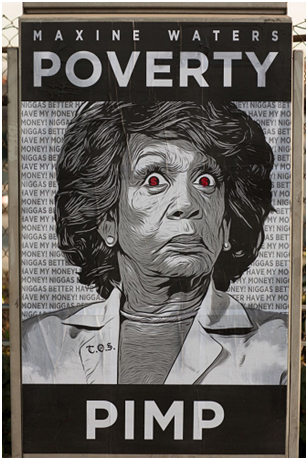 [ssba]The Washington Post is reporting (1/17) that “over 40 Democrats in Congress are boycotting Trump’s Inauguration.”  This is a modest proposal regarding what to do about them.

The first time I met Democrat Maxine Waters was nearly a generation ago when she was a Member of the California State Assembly.

At the State Capitol in Sacramento with the Republican Minority Leader of the State Assembly, I entered a “Members Only” elevator just as Assemblywoman Waters was about to close the door. She gave the Republican Leader a dirty look, then glanced at the customary “no smoking sign” and blew smoke in my face.

A Member of the U.S. Congress since since1990, Maxine Waters remains perennially angry. If Al Sharpton were a transsexual, he would be Maxine Waters, except she may be more demagogic, if that is possible.

A quintessential political hack, she sees everything in terms of race, gender, class, in that order. Extra points if you’re a Palestinian or Muslim.

She has presided over a political machine; her daughter has collected hundreds of thousands of dollars to sell her mother’s name. Given the family’s moral clarity, it is hardly surprising to find Waters (“I wouldn’t waste my time”) as one of at least 42 Members of Congress, more than one in five Democrats, boycotting the swearing-in of Donald J. Trump as our 45th president.

Except for Rep. Ted Lieu who courageously voted against Obama’s Iran deal, most of the boycotters are Obama sycophants. They are leftist, perennial critics of America. Most are economic illiterates who preside helplessly over impoverished districts; they favor the status quo, particularly dysfunctional government schools.

Look at the other Californians: Barbara Lee is “preparing for resistance” against Trump’s “racism, sexism, xenophobia and bigotry”; Louise Royball-Allard boycotts in behalf of “women, Mexicans, and Muslims”; Karen Bass let a Twitter poll instruct her not to participate in the Inaugural.

New York’s Yvette Clarke will not attend because Trump “insults America”; New York’s Adriano Espaillat boycotts because Trump appointed Steve Bannon and Jeff Sessions who “are trying to take us back!”

New Jersey’s Bonnie Watson Coleman will stand Trump up because she is “against evil… even if it comes out of the White House.” Instead she will join the “Women’s March on New Jersey”; presumably women in burkas will protest against American oppression of women.

For years Minnesota’s Keith Ellison, the favored candidate for chairman of the Democratic National Committee, supported Louis Farrakhan. Apparently (and quite implausibly), only Ellison did not know that Farrakhan hates America, hates white people, and hates Jews.

But get this: Ellison won’t attend the inauguration because Trump “preaches division and hate.”

Another boycotter Rep. Jerry Nadler published a manual “How We Resist Trump and His Extreme Agenda.” No wonder Nadler is a heavyweight. Actually the 5’4″ Nadler underwent stomach surgery after he hit 338 pounds.

But the hacked DNC emails quote DNC finance director Jordan Kaplan, “I thought he got his tummy tucked,” and DNC staffer Zach Allen: “He did but it all came back.”

And can we now blame Trump for the weather? Oregon’s Rep. Kurt Schrader insists he will not “freeze my ass out there” because Trump “hasn’t proved himself.”

Nearly all these Democrats say they are following the lead of civil rights icon John Lewis who said, “I think the Russians participated in helping this man get elected and they helped destroy the candidacy of Hillary Clinton. I don’t see [Trump] as a legitimate president.”

Lewis then solemnly announced that for the first time in his political career he would not be attending a presidential inauguration. Alas, it turns out that Lewis and other members of the Black Caucus also boycotted George W. Bush’s inauguration because they did not “believe Bush is the true elected president.

(1) Hacking. All sorts of governments, particularly the Russians and Chinese, have been hacking us for years. Do you remember, for example, the massive hack of the U.S. Office of Personnel Management, involving the most sensitive personal information of government employees. Obama did nothing.

(2) Russians. The supposed Russian hacking in 2016 elicited no reaction from Obama while it occurred. Only after Hillary lost did Obama obsess about it. And the compliant anti-Trump bastions in the CIA and other intelligence agencies played the Russian card to implicitly question Trump’s legitimacy.

(3) Emails. Apparently the hacks tried both the RNC and the DNC. The RNC had defense mechanisms in place. Hillary’s bumbling campaign chief John Podesta answered a phishing email and thereby opened the DNC files. If anything, the DNC lapse should have renewed the focus on Hillary’s misuse of a personal server to store and send classified material, not cause a backlash against Trump.

(4) Truth. Unlike classic Soviet disinformation, the DNC emails were not manufactured but truthful. They show that Hillary’s nomination was rigged, so perhaps her legitimacy as a nominee, not Trump’s legitimacy as president, is the real issue. And if the truthful revelations were germane, don’t voters deserve to have as much accurate information as possible?

(5) Elections. The U.S. in the past worked to subvert foreign elections. Indeed, as recently as Israel’s parliamentary elections in 2015, Obama used tax dollars to try to defeat Bibi Netanyahu. Democrats did not condemn Obama for trying to “destroy the democratic process” in Israel. Even if the Russians obtained and leaked DNC emails, they did not tamper with voting machines to change the election results.

(6) Impact. I have testified as a court-recognized expert witness on what actually changes the outcome of an election. When something happens, other factors can never be presumed constant. It is unclear that DNC email disclosures had any significant impact; if the leaked emails did not occur, the election dynamic would have been different, but not necessarily the outcome.

Post-election studies indicate why Trump carried the Rust Belt states; mainly, Hillary took them for granted and Trump campaigned there. If women made false charges that Trump sexually assaulted them, and that threw the election to Hillary, would they say she was an illegitimate president?

(7) John Lewis. At first I thought Trump should have ignored John Lewis or said something nice like (Rodney King), “Why can’t we all just get along?” Was Trump too harsh on John Lewis? Perhaps “all talk and no action” was not optimum. Yet it’s clear Lewis acts in bad faith.

(8) A Modest Proposal. It’s time for Trump’s emissaries to query all the boycotters. Are they just having a temper tantrum? Or do they agree with Lewis that Trump is not a legitimate president? If so, I suggest a modest proposal.

*For starters, no White House tours for their constituents. Why go to where the illegitimate president lives?

*Next, and more importantly, these recalcitrant Members of Congress should be asked to re-route their    constituent requests that would go to federal departments and agencies.

Instead constituents should work through the office of another Member of Congress who does believe Trump is legitimately the President of the United States.

After this modest proposal is applied for a few weeks, I suspect these Members of Congress will agree, yes, Donald J. Trump is President of the United States.

Arnold Steinberg is a political strategist and analyst. He wrote the two classic graduate texts on politics and media.