43 DISASTROUS THINGS BIDEN WOULD DO AS PRESIDENT 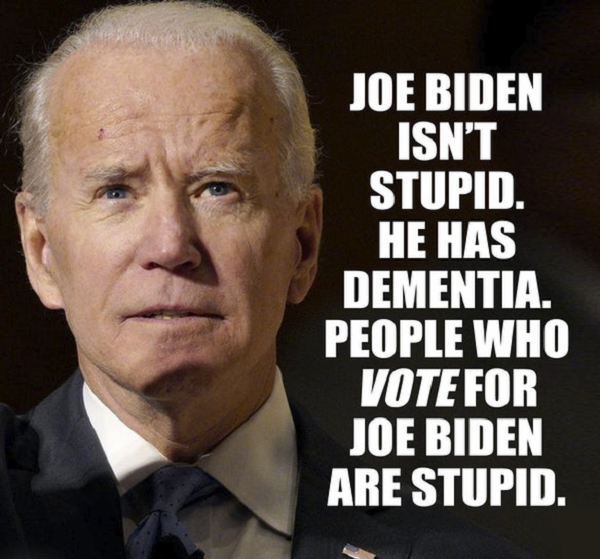 Trump revealed that he had his staff draw up a list of Biden’s proposals in recent weeks, noting his political turn to satisfy the hard left.

“One of the things I just asked my people to do is just draw up for me, just quickly, some of the things that we’ve been hearing about over the last couple of weeks,” he said.

Here is the list of Biden’s proposals, drawn from the transcript of the president’s press conference:

Trump referred to Biden over 30 times during his press conference, which lasted over an hour. “There has never been an election where we’ve had this kind of difference,” he said.

But wait!  There’re only 42 items of Biden Disaster on the list.  Where’s the 43rd?  That would be Outlawing internal combustion engines, as explained this morning (7/16) by our friends at Issues and Insights:

Joe Biden’s $2 trillion climate change plan, released this week, was described by one liberal outlet as “the Green New Deal, minus the crazy.” We beg to differ. Just look at Biden’s plan to eliminate the internal combustion engine.

Biden says that on his first day in office, he will develop “rigorous new fuel economy standards aimed at ensuring 100% of new sales for light- and medium-duty vehicles will be zero emissions.”

He hasn’t said exactly when he wants new cars to be all-electric, but House Democrats have already established a timetable. Their new climate change plan calls for mandating 100% “clean” vehicles by 2035.

Keep in mind that as of today, plug-in electrics account for 0.5% of cars on the road, and made up less than 2% of new vehicles sold in 2019. And that’s despite massive public subsidies that have cost taxpayers $5 billion in credits to — mostly wealthy — EV buyers.

Clearly, consumers are not that interested in plug-ins, which is why Biden and his fellow Democrats want to force electric cars on everyone in the name of climate change.

Aside from fuel economy mandates, Biden also wants to extend and expand the EV tax credit, pump federal money into charging stations, and create a new “cash for clunkers” program for those who trade in a gasoline-powered car for a plug-in.

The cost of all this? Who knows? Aside from the $2 trillion price tag that Biden put on his entire Green New Deal plan, he hasn’t broken down his EV mandate scheme. But Sen. Chuck Schumer has already proposed a cash-for-clunkers plan, which would cost $454 billion over a decade.

And for all this, the electric car mandate will have a negligible impact on CO2 emissions and zero impact on the climate.

For one thing, the CO2 advantage of electric cars is vastly oversold. These are not “zero emissions” vehicles. They simply change the source of the emissions from the car to power plants — most of them powered by coal and natural gas.

A study by the University of Michigan’s Transportation Research Institute found that when you factor in CO2 emissions from electricity production, the average plug-in produces as much CO2 over its lifetime as a gas-powered car that gets 55 miles per gallon.

The CO2 advantage of electric cars diminishes even more when you consider the entire lifecycle of the vehicle, including the environmental impact of mining required to manufacture the batteries. A study by the Union of Concerned Scientists found that CO2 emissions from manufacturing electric cars was 68% higher than gas-powered cars.

When you add it up, the impact on the climate is zero. A report from the Manhattan Institute notes that even if every car on the road were replaced with electric vehicles by 2050, “the resulting reduction in CO2 emissions would be less than 500 million tons per year.” That reduction, it says “will have no measurable impact on world climate.”

The rest of Biden’s environmental plan is equally untethered from reality. Take his proposal to have all the nation’s electricity produced by “clean” fuels by 2035.

Today, 20% of electricity comes from renewable sources. The Energy Information Administration says that based on current trends, that will increase to 32% by 2035 and 38% by 2050.

As the Natural Resources Defense Council put it, “biomass energy damages our climate and air, our forests, and our communities while the industry hides behind veils of misinformation.

That leaves solar and wind, which are massive land hogs and uneconomical without generous government subsidies.

Then there’s Biden’s promise that the entire U.S. economy will produce zero carbon emissions by 2050.

When the Heritage Foundation tried to calculate the economic impact of the carbon taxes needed to cut CO2 emissions by just more than half, it crashed their economic model.

The Green New Deal was never about saving the planet. It’s always been about the left’s desire to gain control of every aspect of our economy and our lives.

Biden’s version might be a modestly watered-down version of the one proposed by socialist Rep. Alexandria Ocasio-Cortez, but it’s hardly any less crazy.